The Gilded Age was an age of New Imperialism. The age of empires began over five thousand years ago, so what was so “new” about imperialism, you ask? Well, there were new players: Germany, Japan, and the United States, to name three. And there were new technologies: industrial transport and communication opened up the interiors of Africa and India, as well as tying together the disparate islands of the Pacific. 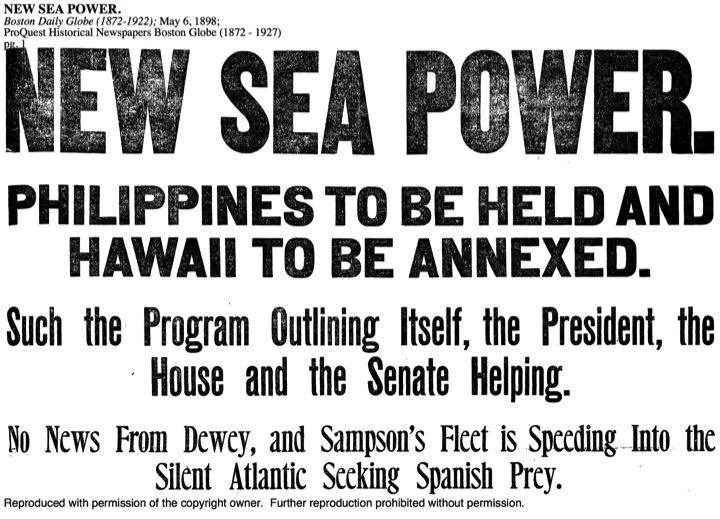 But one of the most puzzling aspects of New Imperialism was its doctrine: “Yes, we are here in your country, ruling your people, and pilfering your resources—but it is all meant to help you, not us.” Cue the rest of the world saying: “Are you kidding me?”

Well, no, the imperialists were not kidding. In fact, they wrote poetry about how much they were not kidding. In “The White Man’s Burden,” Rudyard Kipling famously instructed the Americans that it was their turn to play the game in 1899, after seizing Manila in the Spanish-American War.

The people may hate you for it, Kipling was saying, but it is the Americans’ duty to colonize the Philippines and refashion the islands in the mold of Anglo-American civilization. African American editor Henry Theodore Johnson responded with “The Black Man’s Burden” (1899), which hit every note of opposition in the African American community, including: (1) the unnecessary nature of the war; to (2) how it fits into a long history of oppression of non-white peoples in the name of US expansion; and ends with (3) a reminder that Black Americans were already at war in their own country, not by their own choice. In the end, it would be African American regiments who would save the army in Cuba and serve in significant numbers in the Philippines, both in the US Army and in the Philippine Constabulary.

The authorities in the United States took up Kipling’s standard. They also believed the Philippines could be the Americans’ own foothold in Asia, an economic entrepôt to compete with the Great Powers in China. And, unlike those gauche Spaniards, the Americans would be enlightened rulers. President McKinley proclaimed:

William Howard Taft, the first civil governor of the Philippines (and eventual President of the United States), was credited with saying that the Filipinos would be our “Little Brown Brothers,” which—get this—was too generous for the tastes of most Americans. U.S. soldiers on the march in the Philippines sang in response: “He may be a brother of Big Bill Taft, but he ain’t no brother of mine.” (The ditty was eventually prohibited by officers because it did not make a great first impression, to say the least.)

To be fair, there were some attempts at benevolence by the Americans. To name a few: the establishment of the first truly national and secular coeducational public school system in the islands; the creation of American university scholarships for the brightest Filipino youth; the building of ports, roads, telegraph lines, irrigation systems, hospitals, schools, and universities; the creation of a Filipino National Assembly; several Filipino Commissioners to advise the American governors; and a Supreme Court of the Philippines, led by a Filipino chief justice. This was not really democracy, but it was not the Belgian Congo, either.

(Side note: The only US Treasury money spent for civilian reconstruction in the Philippines was the million dollars paid to farmers to compensate for the lost of their water buffalo to the rinderpest epidemic. The disease wasn’t the Americans’ fault, but the loss of 90% of these beasts of burden would hold economic progress back. Note that the US did not reimburse loss of carabao to military action or even deliberate slaughter in counterinsurgency actions.)

The hypocrisy of New Imperialism also prompted English writer and politician Henry Labouchère to write his own version of the “Brown Man’s Burden,” which included this stanza:

Before you pat Labouchère on the back for his progressive skewering of Kipling’s motives, do know that he was a homophobic campaigner whose most lasting legacy was the Labouchère Amendment that made all sexual activity between men a crime. (This is the law that Oscar Wilde and Alan Turing were prosecuted under.) And Labouchère was not the only anti-imperialist who might disappoint our modern sensibilities. Both Andrew Carnegie and William Jennings Bryan were anti-imperialists, but their opposition was actually based on racist visions of nationhood. Carnegie wanted us to only take land that would “produce Americans, and not foreign races,” and Bryan worried about Chinese and Filipino immigration “exciting a friction and a race prejudice” that would damage America’s homogeneity.

In fact, some of the most vociferous anti-imperialists were racist Southern Democrats, many of them ex-Confederates. A former major in the Confederate Army, Senator John W. Daniel is quoted in the Congressional Record as saying:

We are asked to annex to the United States a witch’s caldron. . . . We are not only asked to annex the caldron and make it a part of our great, broad, Christian, Anglo-Saxon, American land, but we are asked also to annex the contents and take this brew—mixed races, Chinese, Japanese, Malay, Negritos—anybody who has come along in three hundred years, in all of their concatenations and colors; and the travelers who have been there tell us and have written in the books that they are not only of all hues and colors, but there are spotted people there, and, what I have never heard of in any other country, there are striped people there with zebra signs upon them. This mess of Asiatic pottage 7,000 miles from the United States, in a land that we can not colonize and can not inhabit, we are told today by the fortune of a righteous war waged for liberty, for the ascendency of the Declaration of Independence, for the gift of freedom to an adjoining State, we must take up and annex and combine with our own blood, and with our own people, and consecrate them with the oil of American citizenship.

Before you despair, though, let’s move onto Mark Twain, who “updated” the lyrics of the Battle Hymn of the Republic, Julia Howe’s abolitionist hymn, to more properly reflect what he felt Americans had been doing in the Philippines:

And, if that was not enough, Twain redesigned the American flag to include skulls and crossbones instead of stars. His essay “To the Person Sitting in Darkness” is a brilliant piece of political satire:

Both Johnson and Twain give us some faith that not every American bought into the plunder-but-call-it-progress ideology of New Imperialism. But most did.