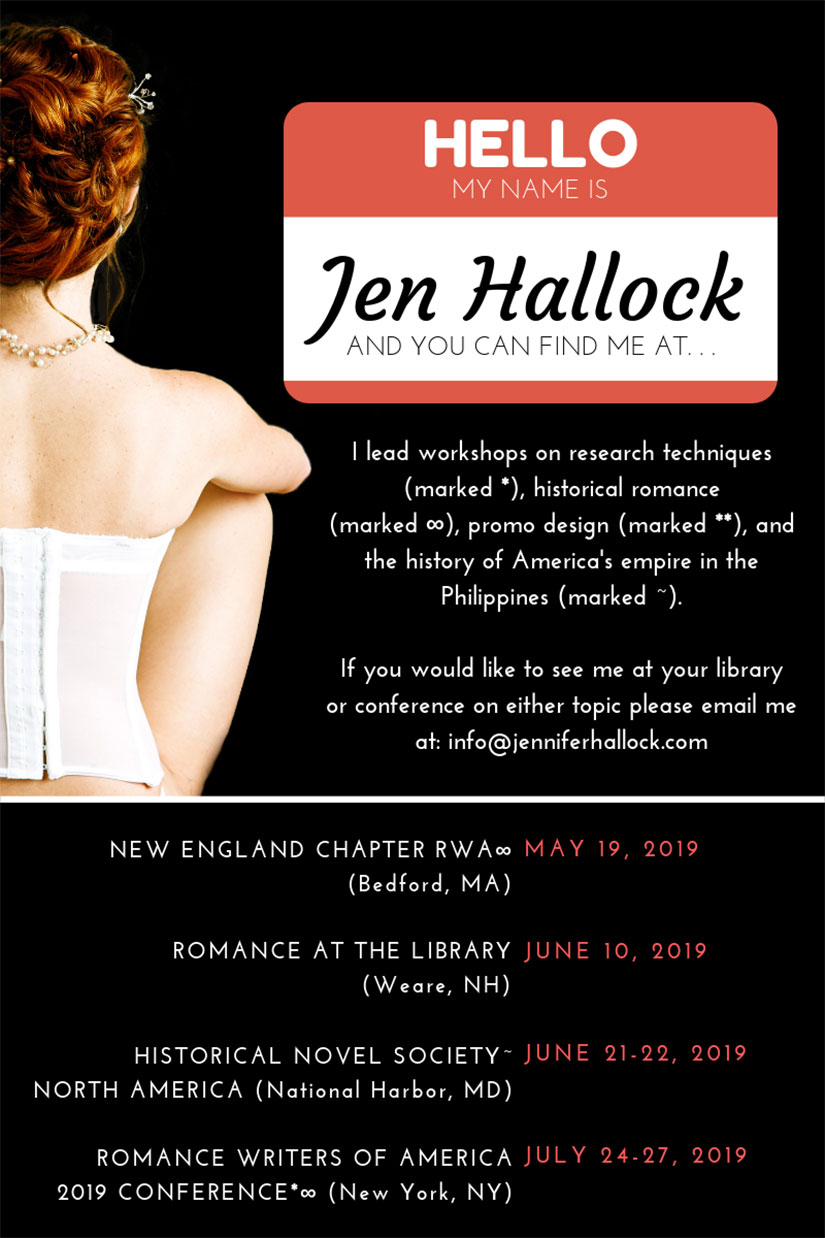 I have a new event! Come out to see Karen Coulters and I bring romance to the Weare Public Library. Whether you like historical stories or modern ones, distant settings or close ones, Karen and I have the book for you. Click on the image below to go to the Facebook event page. Come see us and meet the others of the Weare Area Writers Guild, including librarian and children’s adventure author Michael Sullivan.

This may be the last time I will be giving these three talks, so please come on out if you can: 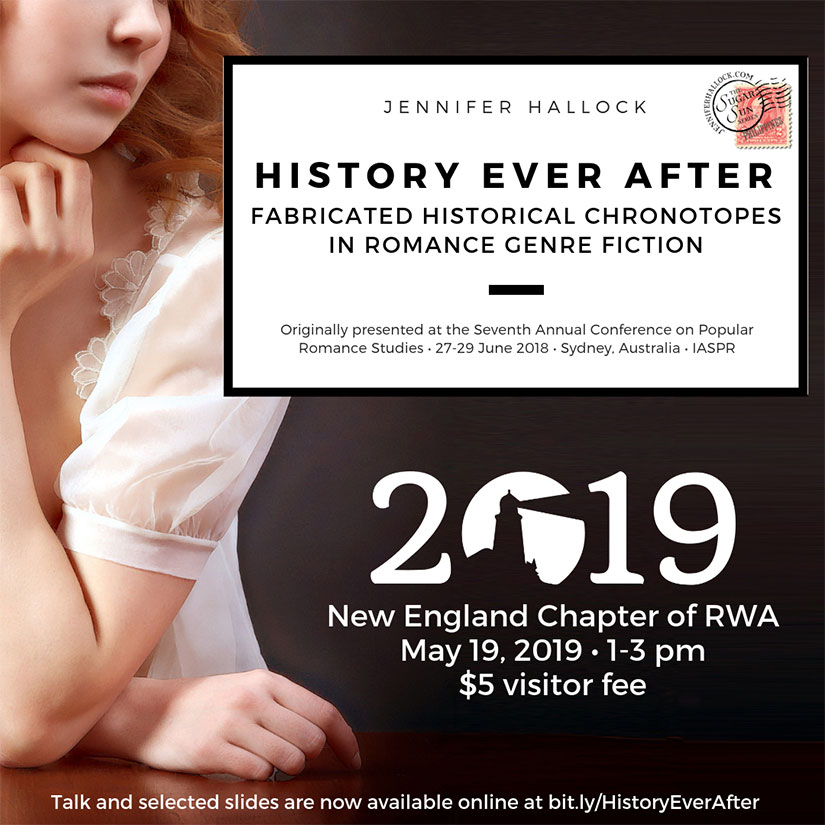 Over eighty percent of bestselling historical romance books published in the first half of 2018 were set in Britain, either during the 19th century or the medieval period. These two fabricated chronotopes are selectively accurate to history and narrowly focused on high ranks of the nobility—in other words, they are “escapism.” This presentation will consider what escapism means in this context, who it serves, and who it harms. While any reader can enjoy a good duke Regency every once in a while, the net impact of the most popular chronotopes may be to corrode our understanding of history, marginalize anyone writing from a wider palette of settings and characters, and exclude authors of color. Read more here. 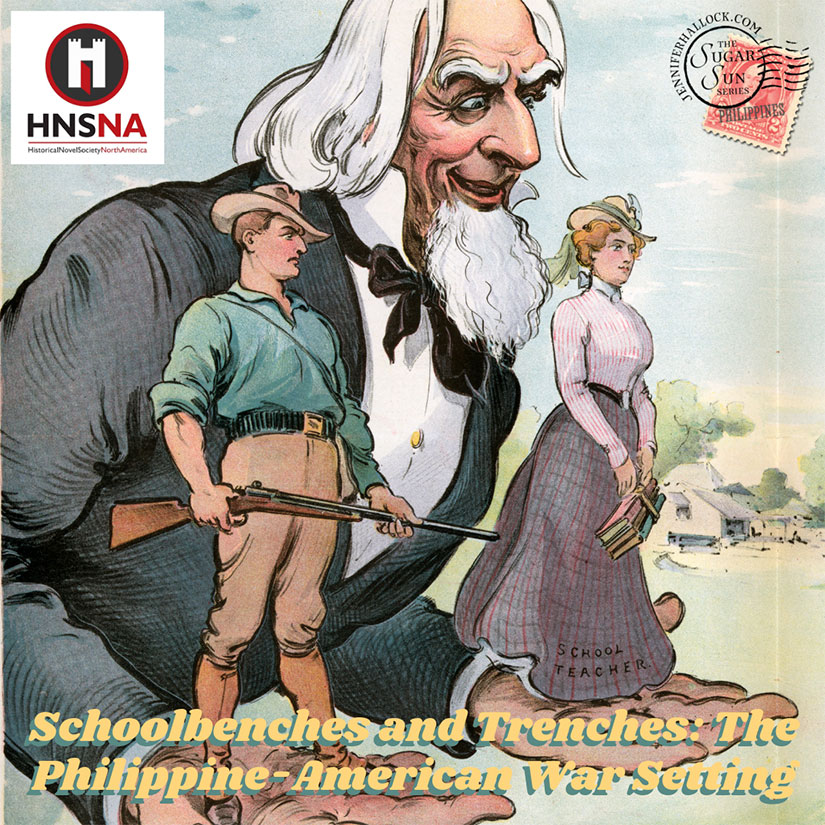 Liberate and uplift? Or conquer and oppress? The revolutionaries of the eighteenth century became the redcoats of the twentieth, fighting a war to seize the Philippines (1899-1913) as the first step toward overseas empire. Enter the American Century, complete with debates over transpacific trade, immigration, Muslim separatists, and national security—all issues that resonate for the modern reader. Historian, teacher, and author Jennifer Hallock will explain why the U.S. colonized the Philippines, how this experience still shapes both countries now, and how it creates engaging American historical fiction. Read more of the history behind the Sugar Sun series here. 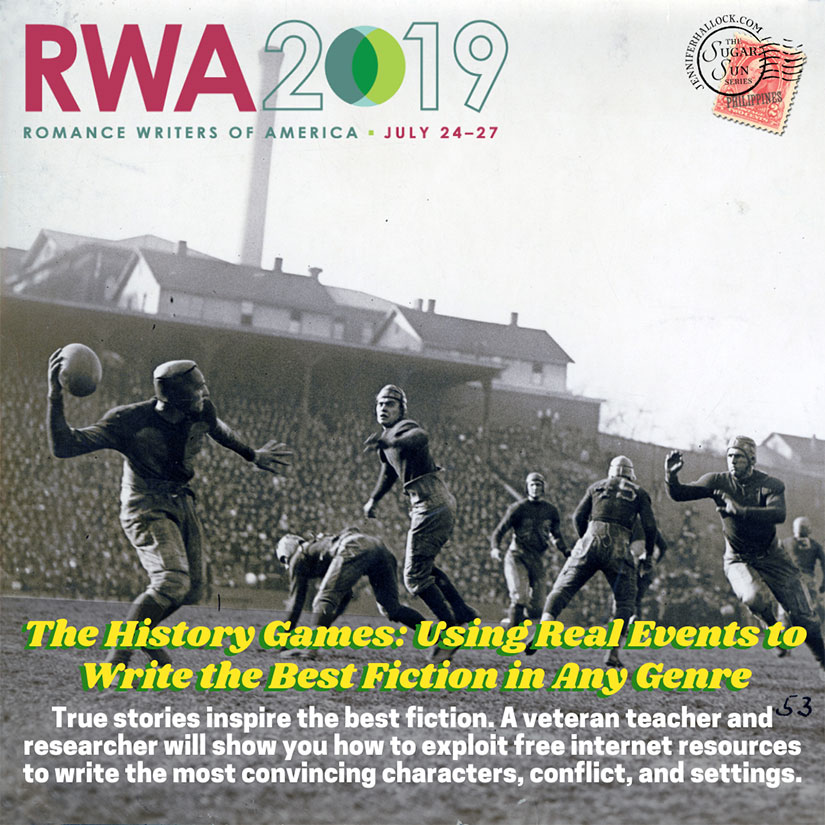 True stories inspire the best fiction. Let history help you find the usual, precocious, and maybe even dangerous heroes and heroines you need! A veteran teacher and researcher will show you how to exploit free sources online: memoirs, newspapers, magazines, advertisements, maps, photographs, clothing, artifacts, videos, and more. This workshop’s emphasis will be on historical research, especially the Regency through the Roaring Twenties, but it will include practical tips and tricks for all authors. Read more here.

Do you notice how sometimes there are events that pull all the random brush strokes of your life into one cohesive painting? I felt like that this weekend. Thread number one: my historical romance novels were available for purchase in person for the first time at the Book Signing for Massachusetts Literacy Foundation, a part of the Let Your Imagination Take Flight Conference of the New England Chapter of RWA. (Edited to add: I sold out of my copies of Under the Sugar Sun! Hooray!) With me were two of my very first NECRWA friends, Kristen Strassel (@KristenStrassel) and Teresa Noelle Roberts (@TeresNoeRoberts) (see photo above: Kristen is in the middle and Teresa on the left).

Kristen and I joined NECRWA the same exact month, and though she has out-published me by a factor of at least thirteen, she has always been the most supportive, most helpful friend-slash-mentor a gal could have. While I hemmed and hawed, she ventured into the indie publishing world with gusto, starting with a delightful rock star vampire romance called Because the Night. Now she also writes about shifters, reality tv stars, country music stars, and more. She’s unstoppable. And Teresa won’t toot her own horn, but she is one of the best at characterization I’ve read, especially with her science fiction (kinky) romances. Despite whole new worlds, strange-looking creatures, and some odd names, the reader is never in doubt about who is who because everyone is just SO THEM. Try Thrill Kinky (Chronicles of the Malcolm, Book 1) to see what I mean.

Thread number two: my novels are set in the Philippines, my home for over four years and the second home of my heart forever. To showcase the great #romanceclass authors from the Philippines who have all been so good to me, I assembled a #MabuhayLove basket of books donated by the likes of Mina V. Esguerra (@minavesguerra), Ines Bautista-Yao (@Inesbyao), Bianca Mori (@thebiancamori) a.k.a. Katrina Ramos Atienza (@iggyatienza), Carla de Guzman (@somemidnights), Marla Miniano (@marlamini), and Chinggay Labrador. The basket was won by contemporary romance author Claire Casewell (@ClaireCasewell). I was sitting next to Claire when her name was called, and I could not have chosen a better winner if I tried. Claire spent part of her childhood in India, which means she loves mangoes—good, because she won almost two pounds of them—and was thrilled to add some Asian-themed reading to her list. She came up to me at the end of the conference specifically to say how much she was looking forward to the books. Woot, woot!

If these authors are new to you, take a look through their booklists and pick the first thing that grabs you. It will not disappoint. Their work is fresh and full of great characterizations—and feels!—but they are not as beholden to the same formulaic pattern seen in so many American romances. Some play with story structure, like the parallel universes in Carla de Guzman’s Cities or the flashback structure of Mina V. Esguerra’s My Imaginary Ex. Or they toy with global settings, like Bianca Mori’s One Night at the Palace Hotel or (again) Cities. Yet no matter how innovative, they get you in the gut every time.

Thread number three: here with me at this NECRWA conference was my high school classmate Joanna Shupe (@JoannaShupe)! I even got to moderate her workshop on “Dirty Deeds Done Right: Take Your Sex Scenes to the Next Level,” which was fabulous. She is funny as all get out. How two suburban girls from Ohio ended up on the East Coast writing historical romance set around the same time, I’ll never know. Maybe it was fate. Joanna’s new Knickerbocker Club series starts in 1888, only a decade before Americans arrived in Manila Bay. (And if you think the rise of New York’s Gilded Age elite is unrelated to America’s grab for empire, you would be wrong. It’s the economy, stupid.) The first full-length novel of her series is out this week: Magnate. Get it! I love a man who rolls up his sleeves and gets to work. Or takes his whole shirt off. That works, too.

Thread number four: I like sports. You might know that. I coach football in the day job, I run marathons (well, half-marathons these days), and I have a weakness for sports heroes after dating a baseball player in high school. It just so happens that my other great NECRWA friend Jen Doyle (@jendoyleink) has just written a wonderful, fun, and sexy contemporary baseball romance: Calling It. It’s smart and snappy, so pick it up! And we’re going to the Red Sox game tomorrow night—my first time at Fenway! We had seats close enough to oogle the catcher’s butt, which you will understand when you read Calling It. And, as Jen said, say what you want about ARod, but the man has some nice thighs. Oh, and I enjoyed the game, too. Yep, the game. That was what it was all about…

Thanks to the NECRWA folks who made this weekend possible, and thank you to the great workshop leaders I saw in action, especially the always informative and entertaining Penny Watson (@PennyRomance), the master of the novella. [Holding wine glass.] This one’s for you!

In short, it’s been an awesome weekend. This is living. #MabuhayLove! 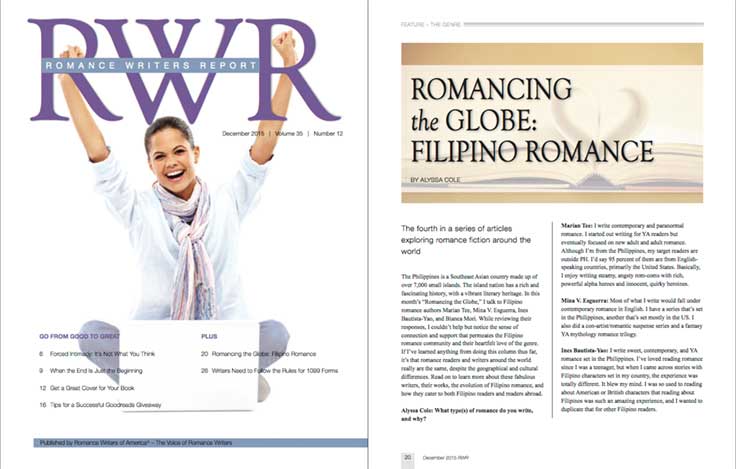 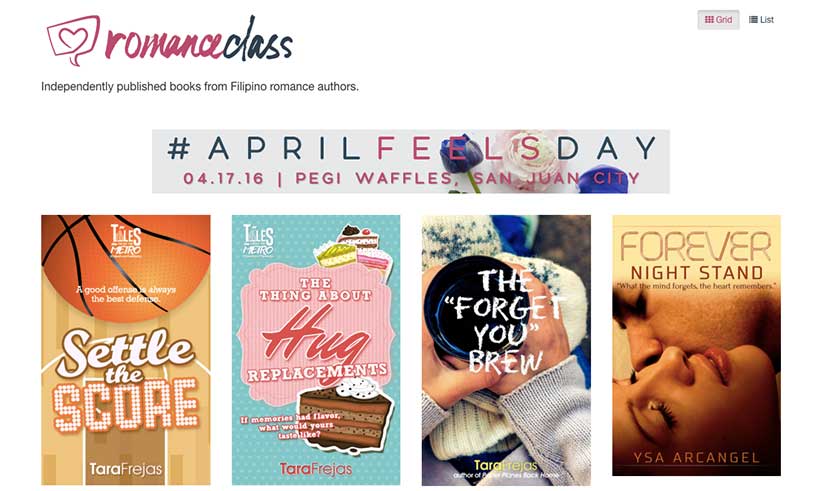