The RT Booklovers Convention is an industry trade show more than writers’ convention. As a result, there are more bloggers, publicists, readers, and vendors than you’ll see at an average RWA event, which takes some focus off the craft of writing in favor of the business and marketing side of things. (And there’s lots of fangirling. See my previous post.) But RT does have craft workshops, even if these tend to be author discussion panels rather than instructional presentations. Learning happens! Let me prove it to you:

Piper Huguley lead a solo workshop called “What’s in a Name?” in which she discussed onomastics, the linguistic field that studies the origins and history of personal names. She discussed considerations in naming your characters, but she went well beyond online tools—though she gave some of those, too, and I’ve added a few to my character tools site. But her sociological lessons captivated me most. For example, she talked about the history and derivation of gender crossover names. Did you know that Ashley, Beverly, Shirley, and Joyce were originally boys’ names? Many only crossed over to girls in the latter half of the twentieth century. Some are just crossing over now, like Mackenzie and Wyatt. Why? According to Huguley, names can be a symbolic armor or protection. If you have one child, and you want to give her the strongest chance at a successful life in a male-dominated society, you might give her a boys’ name. And there are “born to win” names, taken up by the African-American community when their children could not get the respect they deserved in white society. Earl, for example. Or Lloyd (for Lord). Or Piper’s relative, King Huguley. Or her character Champion Jack. Or Prince. “The Artist Formerly Known as Prince” was a legal name change forced by Prince’s dispute with Warner Bros music, but Prince itself was born that way. Prince’s father had the stage name Prince, and he gave it legally to his son—Prince Rogers Nelson—because “I wanted him to do everything I wanted to do.” Shivers, right?

Alisha Rai, HelenKay Dimon, and Sonali Dev led a workshop on “Heroines: You Can Have It All.” They brought up an issue that has always been prickly to me: the “TSTL” (“too stupid to live”) criticism. Readers can be hard on heroines, especially ones who make mistakes. Yet, as HelenKay pointed out, sometimes our characters have to make the wrong choices, especially if those errors fit the character or situation. The key is to allow your heroine to be strong in other ways. Alisha talked about this in terms of “competence porn,” à la My Crazy Ex-Girlfriend. In that wonderful show, Rebecca Bunch (Rachel Bloom) is an utter mess with relationships, but she is a bloody brilliant lawyer. Actually, she is a casually brilliant lawyer because it almost seems to take no effort. She’s just that good. She puts relatively little thought into her job until she needs to save the day, and then—whoosh, she’s stunning. When the show goes back to her personal life, though, she is still a freaking mess. She’s a relatable heroine, but still one we admire (most of the time). Sonali Dev talked about a different problem: turning the reader’s knee-jerk pity into a heroine’s weapon. Instead of making her heroine Mili a stereotypical child bride, she let Mili own it. Mili essentially says, “Okay, I’m a child bride—promised but not yet married. And instead of pouting about it right now, let me use that status to get educated and do what I want to do first.” This kind of nuance is really inspiring.

Another great workshop was “Bangin’ Hot Betas” with Karen Stivali, Vanessa North, Annabeth Albert, and Tamsen Parker. They write hot, hot books—and they give good workshop, too. The big point was that beta does not mean boring. In fact, you can mine more complexity with a beta character but still get all the feels. The “let me teach him a thing or two in the bedroom” is pretty sexy, if you think about it. Betas can be more self-aware, more concerned for their partner’s needs, and more vulnerable. The authors acknowledged that pitching a beta hero is difficult, but their advice was to focus on what is awesome about the hero. Don’t highlight the beta bit—just write it that way. Like any book, get the tension and stakes high. Write it with the best dialogue and the hottest romance, and use those attributes to market the book. The reader may not even know why she loves the hero so much, but the point is that she does!

I also loved the “Historicals: Welcome to Americana” workshop, but my notes were a little more sparse because I was too awestruck to really process everything that was being said. Why? Let me tell you the panel: Beverly Jenkins (our 2018 NECRWA Master Class presenter!), Alyssa Cole, Piper Huguley, Joanna Shupe, Kianna Alexander, and Kate McMurray. The latter two I have not read yet, but I plan to. They talked about all sorts of issues I care about, including the need to allow for a more representative slate of characters in more varied time settings, especially in American history. Ms. Bev said that a reader once told her that she couldn’t imagine an HEA between African-Americans in the nineteenth century. Ms. Bev rightly pointed out: “Even in the toughest times, people still love, still have birthday parties, still have picnics.” So true. While we all love our Regency historicals, we have to acknowledge that the real Regency period was one engulfed in war. We don’t get that in our costume dramas, which are significantly based upon Georgette Heyer’s description of the Regency rather than real history. For example, even Jane Austen spent much of her life not in the bucolic countryside—or even in Bath—but in Southampton, a “dock town filled with public drunkenness, street prostitution, and violence.” If you, like me, appreciate a little real history thrown into your entertainment, Camille Hadley Jones and I discuss this kind of thing in our new Facebook group, History Ever After. Come on by!

There were many great reader events, but one that really stood out was the Smart Bitches, Trashy Books Reader Recommendation Party. Here’s how it went: the Bitches gave a book recommendation each—with reasons—and then we readers got a chance. Sarah Wendell came around with her mic and briefly interviewed us on what we liked and why. Here’s the thing: Sarah is funny. Correction: Sarah is freaking hilarious. I imagine that doing a podcast for so long has sharpened her quick wit, but part of it is talent, plain and simple. What fun! Those who made recommendations got extra raffle tickets. (We had each started with one, if you were keeping score.) After a bunch of book recs, raffle prizes were awarded. Then rinse and repeat. I got to give one recommendation—just one, and it was so hard to choose! But I had to pimp #romanceclass, so I chose one that had both Manila and millennial feels, so I went to one of my favorites: Mina V. Esguerra’s Iris After the Incident. There was a lot of good book noise (“oooohhh”) when I described it, so I hope lots of people bought it! If you want to know more, read my review here.

These were just a few of the offerings in Atlanta. If I did not mention a panel or workshop, I probably just could not get to it. Despite all the awesomeness above, I actually spent most of my time at marketing or industry workshops, which will be the subject of my next post. Stay tuned!

Jen Doyle and I were welcomed to the South by a frog with a pitchfork. (By the way, you can book this venue for your wedding, just in case you were wondering.) Our favorite ridiculous site was the Peachoid, a water tower that must have been engineered by Sir Mix a Lot.

There were so many people at #RT17. I met Lydia San Andres, my Edwardian Promenade co-blogger, for the first time, which was awesome. She was handing out authentic Dominican chocolate from Xocolat—not the only reason I love her, but a good one. I also saw Maita Rue, who flew all the way from the Philippines! I bought five decks of Talecraft cards off her, which will be the subject of a later post.

I also fangirled all over Tiffany Reisz, Sonali Dev, and (of course!) Courtney Milan. I thanked Ms. Milan for her wonderful mention in Amazon Book Review. I’m still blushing. All three authors were so, so nice. It was such a thrill.

Yet it is the readers who make #RT17 so incredible—and the scantily clad male cover models in the bars. Check out the two ladies with “When I think about books, I touch my shelf” t-shirts. Or the pair of librarians with their circulation card bags. Or the costume pajamas at Dreamspinner’s Cinema Craptastique. I love it all.

Wow, do people spend a lot of money on swag. Unfortunately, a lot of it ends up in the trash. It’s sad, but you collect so much over the course of the week that there’s no alternative. If you want to stand out from the crowd, swag-wise, you have to either give away books—see my amazing haul below, all but two of which were free—or give away an item that is both unique and useful. Next to Lydia’s chocolate, rubber duckies were my big winner. These will go to a friend who collects them. 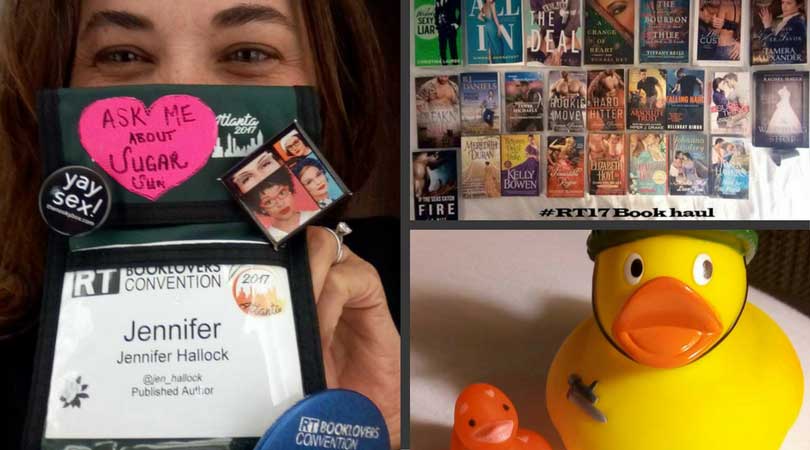 Oh yeah, and there were workshops. Learning happened! I will share some of the lessons I learned in my next post.

We passed the Peachoid again, and it looked no less obscene in the daytime. Really, what were they thinking? 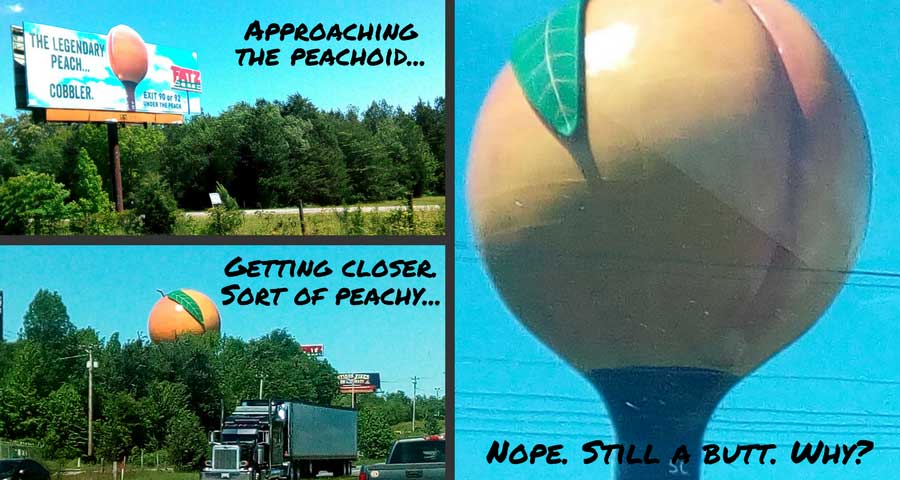 Tomorrow we will breakfast in Boonsboro at the inn owned by Nora Roberts before heading back to Boston. We hope everyone has safe travels home from #RT17!