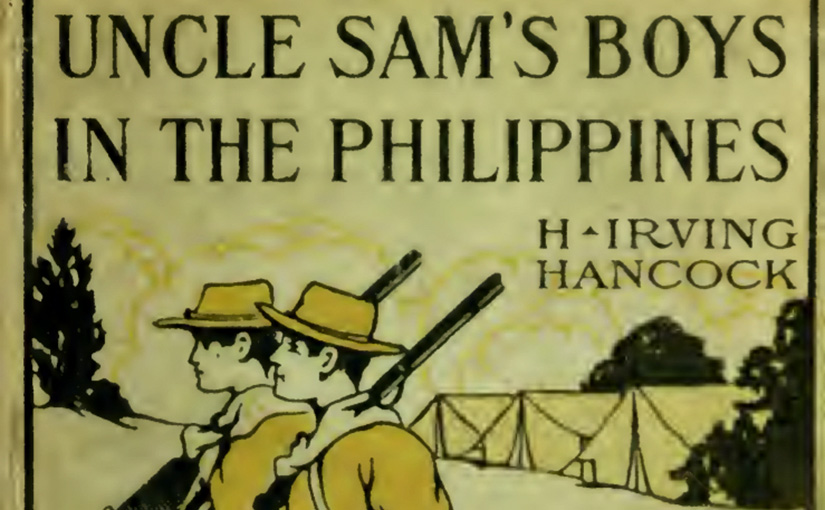 Part of me does not want to post this, but you’re going to see the word in the book, so…

It’s a terrible word. Don’t use it. If you are too young to understand how offensive it is, just trust me. This racial slur was used widely by American soldiers, politicians, and civilians to denigrate Filipinos—and later Koreans and Vietnamese in a slight variation (gook). The word apparently was meant to mock Tagalog speakers with their heavy use of the letter g. (G is four times more frequent in Tagalog as it is in English, and is the third most common letter overall in the language.) I read a different explanation in a children’s book of the time called Uncle Sam’s Boys, where it was claimed that the word came from Filipino revolutionaries pretending to be the “good” guys around American soldiers, and somehow “good-good” got shortened. (Yes, they used racial slurs in a children’s book. When I say that racism popped up everywhere in my research, I really mean it.)

Of course, no matter how the Americans came up with the word, the fact that they used it with such vitriol is all on them. This brings up a problem for my writing. How accurate should a historical romance novel be? Americans called Filipinos everything from the N-word to the G-word and more, and they published such language in their novels, memoirs, newspapers, and even bold newspaper headlines. I could have ignored the record, but sanitizing history does not help those who were oppressed. As I recently heard author Wes Moore say: “The worst thing we can take away from a tragedy is to pretend the tragedy did not happen.” If learning about how Americans treated Filipinos makes you angry, then good.

How blind were those Americans to their own small-mindedness? This may help you understand: the English language did not even have a word for racism yet. There was no single term to convey the idea that discrimination based upon race was wrong—not until 1903, and it was not widely used until the 1930s. There was a similar-sounding word, racialism, which was the pseudo-scientific study of traits according to race—as if eugenics was the most natural thing in the world. Yikes.

Therefore, my characters do not come to an epiphany about racial harmony because that would be wildly anachronistic. Georgie falls in love with a man based on his qualities as a man. Javier falls in love with a woman based on her qualities as a woman. That will have to be enough. In fact, Georgie’s relationship with Javier is more complicated than race. It involves class, too. Javier is more wealthy, more cultured, more connected, and more powerful than she is. Javier also has the edge on education and certainly on languages. They do not occupy the same social sphere, no, but it is hard to say whose sphere is higher. The irony of American “benevolent assimilation” (read: “civilizing mission”) is that many of the Yankees Javier meets are less “civilized” than he is. Sometimes he cannot help but point that out to them. (No, it doesn’t go well.)

The truly sad part of this all is that I borrowed the most outrageous insults straight from period sources. I found it distasteful to make these things up, so I relied upon distasteful people to do it for me. Maybe readers will mistakenly believe that I believe these things, but I hope not. Really, I did tone it down. The serious historian inside of me says this book is all unicorns and rainbows, but there is only so much my romantic side can stomach.

On Twitter recently, an author said that she received a two-star ratings on Amazon for NOT warning readers of a non-white main character. [Sigh.] Clearly, racism is still out there. I just hope people understand that accepting something is true to history does not make it the historian’s preference. (Cover photo from Uncle Sam’s Boys in the Philippines.)