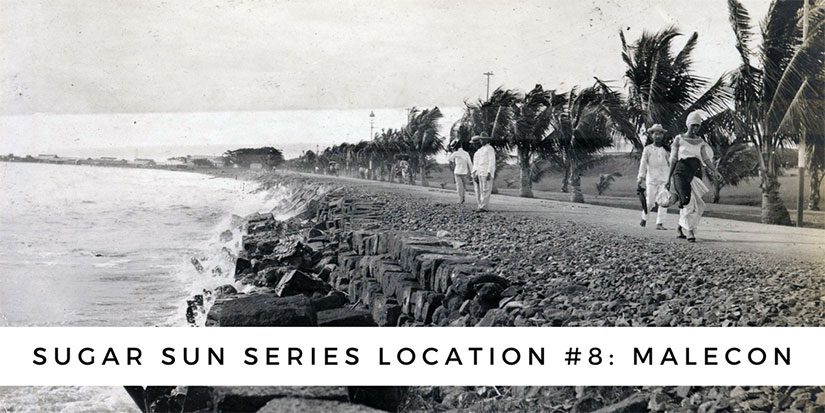 One thing that hasn’t changed in Manila since 1900 is the traffic. One anonymous visitor said about the end of the evening on the Luneta:

…there is a crack of the whip and a grand hurrah and one mad dash for the different homes. I wonder there are not dozen smash ups each afternoon, but there are not. I used to melt and close my eyes, expecting to be dashed into eternity any moment, but I have learned to like it, and I don’t want any one to pass me on the road.

We’ve all been there.

Some park goers did not wait for the end of the evening to race, though. With the old shoreline, the water went right up to the walls of Fort Santiago—or almost. There was a single open road there, called the Malecón, where carriages practically flew:

The two vehicles ate up the open road. Georgie did not consider herself a coward, but she was torn between fearing for the horses’ safety and for her own. Maybe sensing that, Javier put his arm around her shoulders, pulling her closer to his side. It was too cozy by half, but it steadied her enough to make the frenetic motion bearable.

The two nags kept changing the lead. One would break out in a small burst of speed, and then slow in recovery while the other made his move. They had at least a mile to go until the “finish” at Fort Santiago, and it seemed that Georgie’s original prediction was on the mark: the sole surviving animal would win. It was less a race than a gladiatorial bout.

You can find Malecón at location 5 on the map below. (These maps of Manila and the Visayas, which you can find in Under the Sugar Sun, were a suggestion of a faithful reader, Priscilla Lockney. Awesome, right?! But when I tried to find maps from before the port expansion that changed the shoreline, it was a challenge. I ended up making my own from a rare Spanish map reprinted in the Harper’s Pictorial History of the War with Spain, Volume II. I was almost as proud of these as I was of finishing the book.)

The Malecón ran from the Luneta along the bay, “under the yawning mouths of the old muzzle loaders” to Fort Santiago (see 3). It seems like a strange place for romance, but it was that, too. Maybe it was the electric lamp posts installed in 1893, part of a half a million peso city improvement project. Maybe it was the company:

Georgina looked up. This close, she could see honey-colored circles in Javier’s brown irises. They looked like rings on a tree. Did she see in them the same fire she felt, or was this a part of the show?

Gently Javier tilted her chin up, his lips now inches away. No one had ever tried to kiss her, not even Archie, whose amorous attentions had all been by pen. She thought about resisting, but that was all it was, a thought. Javier’s breath was clean. Only the smallest bite of scotch lingered from lunch. Given her past, Georgie had never believed alcohol could be an aphrodisiac, but on this man the crisp scent was provocative. He smelled of confidence and power, yet his lips looked surprisingly soft—