I spent many Thanksgivings in the Philippines, and it was great. We had some fun parties, including one at our farm. 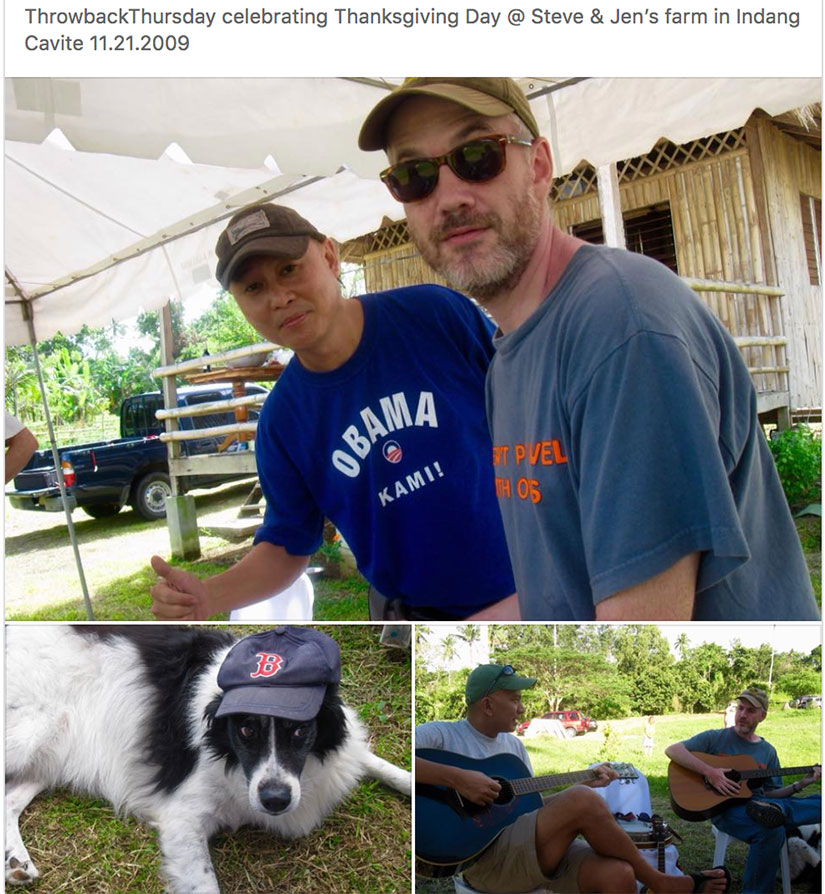 The only drawbacks were that it was a normal workday for me, and I did not get to watch football live all day long. This year I have a little time off: my exams are graded and student comments written, so wheeeee! And, like in recent years, we will celebrate “Friendsgiving” in New England with two vegetarians. Meh, I’m not big into Turkey, anyway, so I’ll take it. But how did soldiers far from home celebrate in 1899? 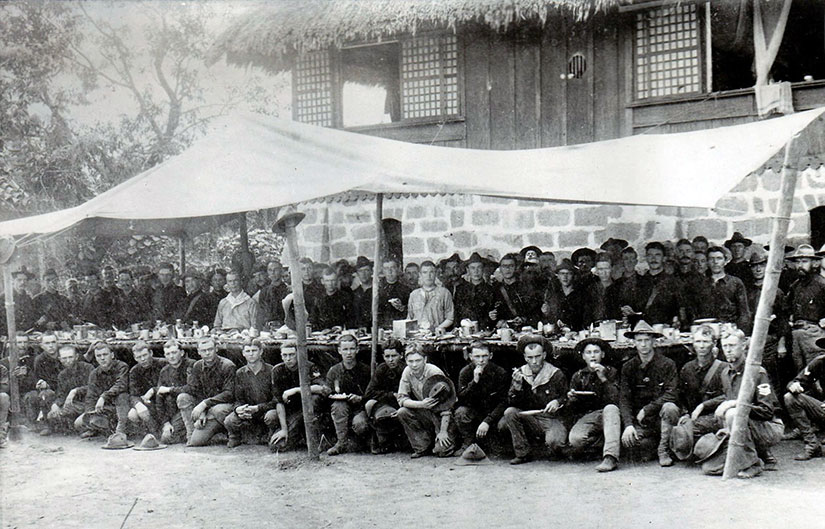 30TH VOLUNTEER INFANTRY REGIMENT: Thanksgiving dinner for the men of Company “D”, 30th Volunteer Infantry Regiment in the outer Manila trenches at Pasay. The photo was taken on November 24, 1899, and shows the men sitting down to their meal laid out on a long bamboo table protected from the hot sun by a canvas awning. The Soldiers from Company “D” are wearing their blue Army service shirts and campaign hats. Some men wear a special red kerchief around their necks, which later became a hallmark of the regiment and earned them the nickname, “The men in the crimson scarves.” Company D was lead by Captain Kenneth M. Burr throughout their tour in the Philippine Islands. Photo and caption uploaded by Scott Slaten on the Philippine-American War Facebook Group. (If you are interested in this war at all, you really should follow this group. It’s free, the discussions are strident, and the photos are amazing.)

What would it have been like in November 1899, just as the Philippine-American War was moving from conventional conflict to guerrilla war? Yes, the American military had more men, more guns (though not necessarily better ones), and more bullets. And without General Antonio Luna, who had recently been assassinated, the Philippine forces lost one of its greatest strategists. But Aguinaldo made the decision to disband his forces for an unconventional conflict, and that gave the Filipino revolutionaries a new edge. For the American troops, they had to realize they might not be going home anytime soon.

While I can easily say that I do not support America’s imperialist cause in this war, none of that changes history. I wonder what was going through these young men’s minds on this day. 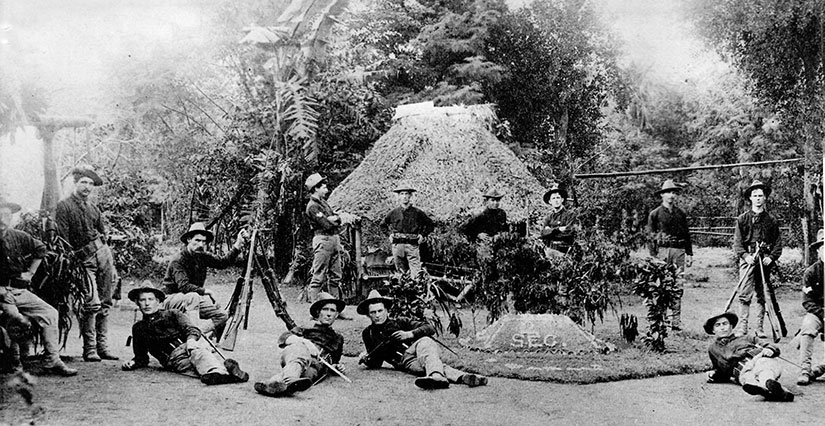 30th INFANTRY REGIMENT, USV – Thanksgiving Day at Pasay, outer Manila trenches with the 2nd Section, Company G, 30th Infantry Regiment USV, November 1899. The photo shows the men with their Krag rifles stacked on the street of their small camp. Note the sign for the 2nd Section in the middle of the photograph. These photos are also nice reminders that even in war, people celebrate holidays and birthdays. They even fall in love. (That’s where we historical romance authors come in, as Beverly Jenkins so often reminds us.) But what these men’s families wanted to know was not whether they were having a good time, but when they would be coming home. They would not get their answer for another whole year:

This was from the November 22, 1900, edition of the Washington Post. Since most of these soldiers had originally volunteered for what they had thought was a brief war in Cuba, this was probably a relief. Some did re-enlist as regulars, though, which meant a much longer commitment.

For you Sugar Sun readers out there, here’s a little Thanksgiving tidbit for you: Pilar Altarejos, daughter of Javier and Georgina, was born on Thanksgiving 1903. I thought that was appropriate. The couple could be thankful for being together— how romantic!—and I thought it would get Javier’s nationalist back up a little.

Hopefully, wherever you are, I hope you have a great week. The best thing about this holiday is the reminder to be grateful for something. I am grateful for so many things, but I want to add you, my readers, to that list. Thank you for reading and for following the Altarejos clan through all its ups and downs. More adventures in love will be coming, I promise!

(Note: This post was originally written on January 9, 2016.) It’s fiesta time, people! You thought the holidays were over, but in Cebu they are just beginning. All you need is some nutmeg, a drum, and a statue of Baby Jesus.

The nutmeg is a nod to history. Spices are why Magellan sailed to Cebu. In medieval Europe, this stuff was more valuable than its weight in gold. It not only tasted good, it warded off the bubonic plague, too! (Don’t try that at home, folks.) By the early 1500s, the Portuguese had locked up the eastern trading routes around Africa and India, leaving the Spanish to sail west off the edge of the world. No, just kidding. Anyone with education back then knew the world was round, but they didn’t know a good route around the Americas. Portuguese explorer Ferdinand Magellan told King Charles I of Spain that he could find a western passage for the right price. It took him two years to make good on that promise—two years of being chased by the angry Portuguese navy; surviving mutinies, storms, starvation, and winter; and crossing the un-pacific Pacific Ocean. Finally, Magellan and his remaining crew arrived in Cebu in 1521.

There Magellan managed to convince the raja of Cebu, his harem, and the entire settlement to convert to Christianity. The people already had their own idols they danced to, but they pledged to put those away in favor of a present from Magellan: the Santo Niño, or Child Jesus. Magellan even offered to make Christianity work for his new ally, Raja Humabon, now called Don Carlos. Carlos pointed out that the raja of Mactan, a small neighboring island, was spurning the right and true religion. Off Magellan went to fight Lapu-Lapu with an unnecessarily small number of Spanish troops: forty-nine to Lapu-Lapu’s fifteen hundred. Magellan must have never heard MacArthur’s (or the Princess Bride’s) twentieth-century warning to “never fight a land war in Asia.” Intending to be a Christian miracle worker, he died a Christian martyr. His body was not found after being torn apart by the Mactan defenders, adding to Lapu-Lapu’s legend as a true nationalist hero. He even has a delicious fish (local grouper) named after him. Very cool.

The Spaniards staying with Don Carlos overstayed their welcome, possibly raping some of the raja’s women after a fiesta (not a tradition of Sinulog). A few of Magellan’s crew, under the captaincy of Juan Sebastian del Cano, made it back to Spain after circumnavigating the globe for the first time. This was the last the native Filipinos saw of the Spanish for a while. Other Spaniards made it to the southern tip of Mindanao long enough to name the islands Las Islas Felipinas in honor of Phillip II, but it took 43 years for Miguel Lopez de Legaspi to make it to Cebu. What did he see there? People dancing to the Santo Niño! (Probably among other idols, but he did not emphasize that part.) A miracle!

Soon came the friars, and Catholicism was in the Philippines to stay. Every town’s church is named after a saint, and that saint’s festival day is celebrated with a procession of the wooden santo statue along the main thoroughfare. In Cebu the sinulog, or “current of the river,” was also danced to please the Santo Niño during his parade. Native drums, gongs, and frenzied movement resemble the pagan festival it once was. Sometime in the 1980s Cebu’s Sinulog became big business, and people travel from all over the world to see it. The schedule for this year’s event includes an entire month’s worth of events, from a historical recreation of Don Carlos’s baptism to a singing competition (Sinulog Idol, of course!). The Santo Niño also travels round trip to Mactan (Lapu-Lapu would not be happy, I think) the day before the big parade, which itself lasts about twelve hours. The costumes are out of sight. In comparison, Americans have no idea how to throw a parade. Even the Macy’s Thanksgiving Day parade cannot beat this, especially since Sinulog is a regional celebration. I’ve not even mentioned Quiapo’s Black Nazarene, Iloilo’s Dinagyang, Bacolod’s Masskara, Kalibo’s Ati-Atihan, and so on.

If you live in Cebu, I hope that you were not planning to drive anywhere this week or next. Happy Sinulog!