What is micro-history, you ask? It is the investigation of small units in history—an individual, a small village, a family, or a school, for example. Why is this important? Because large trends, the kind of history you get in encyclopedias, smooth out history to give you only the most average experience. And who likes to read about average? No one!

You want to read about the outliers, the dangerous, the obscure, the interesting! Part of what authors are selling is the chance to live someone else’s life for a little while. Maybe your character is Marianne, a half-Jamaican hotelier seduced by a spy during the Crimean War; or Lily, a diplomat’s daughter who rescues a wounded American Marine in the Boxer Rebellion in China. 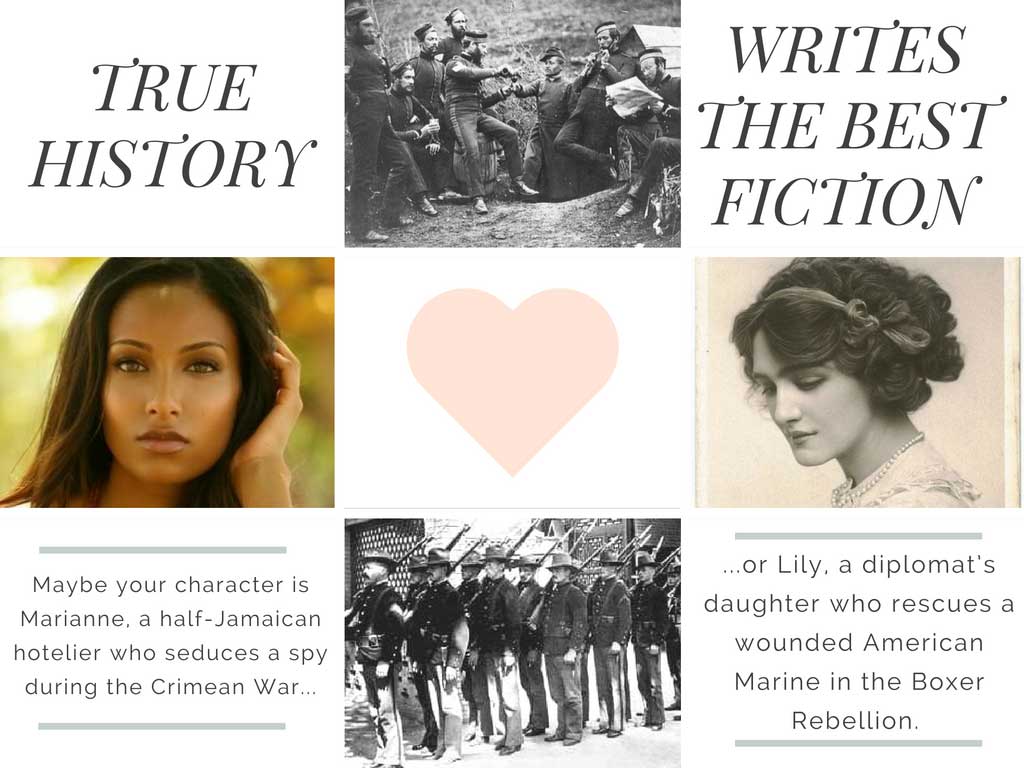 Either way, flat descriptions from encyclopedias won’t cut it. You need to mine primary sources for the convincing details of everyday life. Where else would you learn how Marianne chased off a thief with her rusty horse pistol, primed only with coffee? Or how Lily saved her favorite pony from becoming dinner for starving Americans in Beijing?

Marianne and Lily are intriguing because they are based upon real people—real outliers. My inspiration for Marianne came from The Wonderful Adventures of Mary Seacole, while Lily is based on Laura Conger in Sarah Pike Conger’s Letters from China. Cool books! Where did I find them, you ask? At the end of this post, you will find a handout detailing many wonderful places to find free primary sources on the internet: books, articles, artifacts, photographs and videos (if available), illustrations, newspapers, and more, all from the time period itself.

But how do you use this information to create realistic characters and believable conflict? And how do you know what facts to use and what to make up? I came up with five models to help you figure it out:

My fake characters Marianne and Lily are based upon the broad outlines of real people—one or two sides of a mold—but if I actually wrote books for them I would fictionalize them by mixing in other elements. Pour in all the individual hopes, dreams, and quirks that you need to make each character three-dimensional.

Here is an example from my writing: I found the original inspiration for my character Allegra Alazas of Sugar Moon from a single lantern slide found at the Philippine Photographs Digital Archive. Why did this image speak to me? Because the half-scowl on the woman’s face seems to say, “Mr. Photographer, you and I both know that you are an idiot, but I am just polite enough not to say it out loud.” Based on what I could discern from the photo, I thought that maybe this woman would have been educated in Manila at a fancy convent school. So I found a few of those in another primary source, a Commercial Directory of Manila in 1901. And what would the woman in the photo say to Sister Elenteria in their Artificial Flowers class? Well, if you know Allegra, you know that she told the sister where exactly she could put her artificial flowers in a country with bountiful natural ones. And Allegra was born. 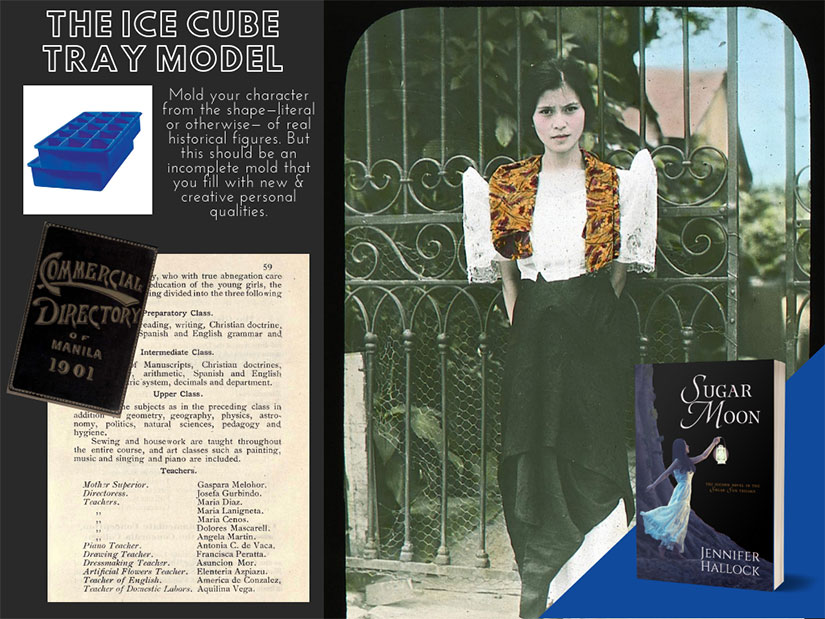 What if you find outliers you don’t like? There always will be archival sources that represent the worst of a chosen era, and these constraints can give you what you need for a foil or villain. I did this for Archie Blaxton and the Stinnetts, the ugly Americans from Under the Sugar Sun and Tempting Hymn. These characters were partly modeled after the Coles, teachers in Leyte (see photo of Mary Cole below). 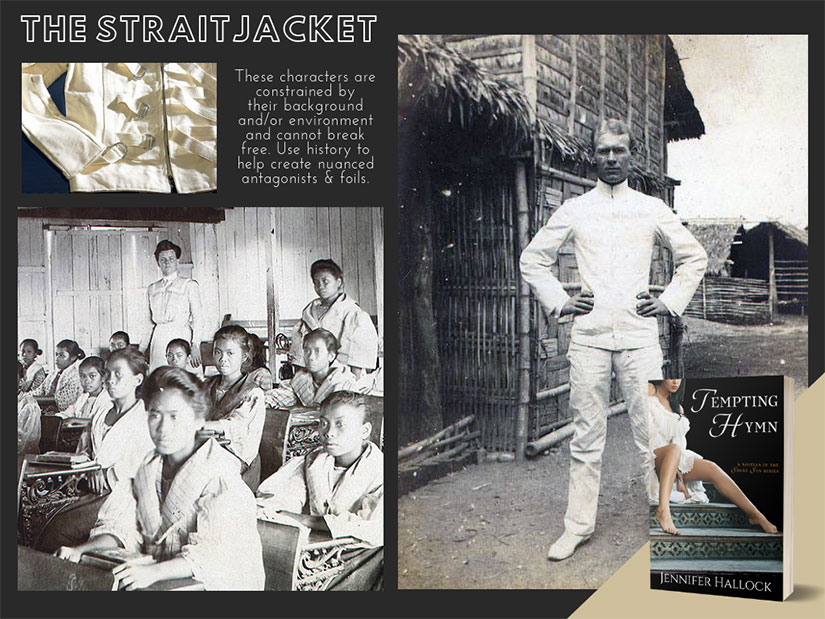 Real history can also provide conflict, too. Why did Georgina Potter head to the Philippines in Under the Sugar Sun? I found a newspaper article in the Manila Times archive about an undelivered letter that fell into the hands of the wrong person. It was written by a very-worried sister who did not know what had become of her brother. And I thought to myself, “Where was this brother? What was the sister going to do next? What would happen when she actually finds him?” Good conflict adds heat underneath your character’s feet. I call this the open flame. 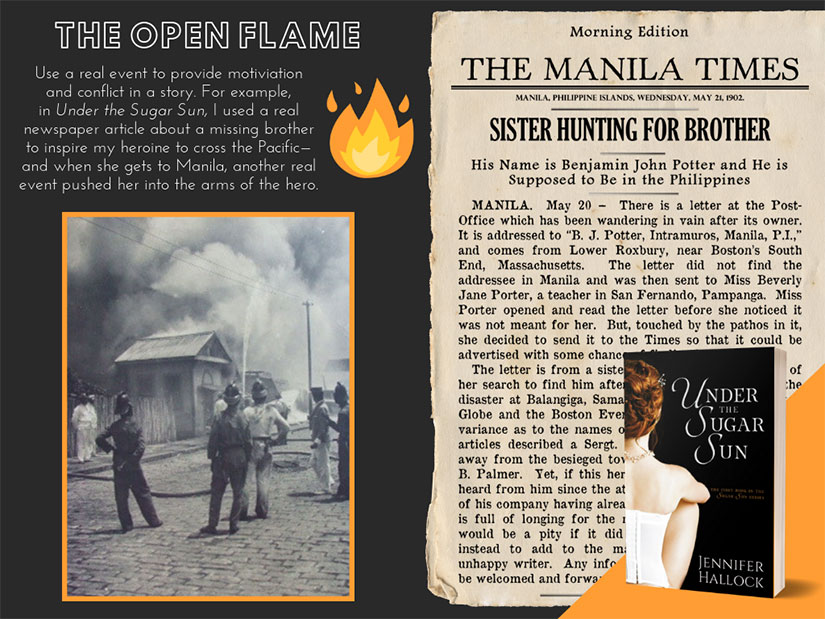 For Sugar Moon, I gave my hero a troubled past. Ground down by the millstone of war, he is someone new because of this real event. It is a big part of his internal conflict. 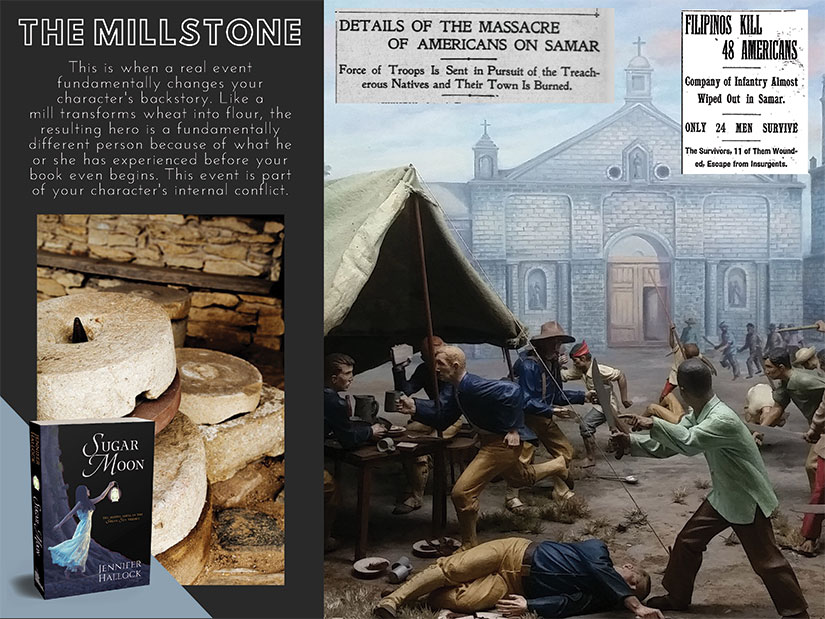 Finally, I use real vignettes and anecdotes throughout my books. A lot of people remember the snake scene in Under the Sugar Sun, and I wish I could take full credit for it. But that really happened to a real clueless American on one of his first nights in the Philippines in the early 1900s. There’s some stuff you cannot make up, and you shouldn’t have to. But you do need those little details that make your book convincing.

Consider this: when you walk into a house, where do you find the small details important to that family’s daily life? On their fridge. (Or their medicine cabinet, but shame on you!) Therefore, I call this the fridge magnet model. These little snippets tell your reader more about a character or setting than Mr. Exposition ever could. For example, the snake story told me how clever people were to use one pest to control another; and it told me that Georgie, for all her pluck, wasn’t going to get anything right her night in Bais. Her “fish out of water” anxieties will be essential to her later conflict with Javier. 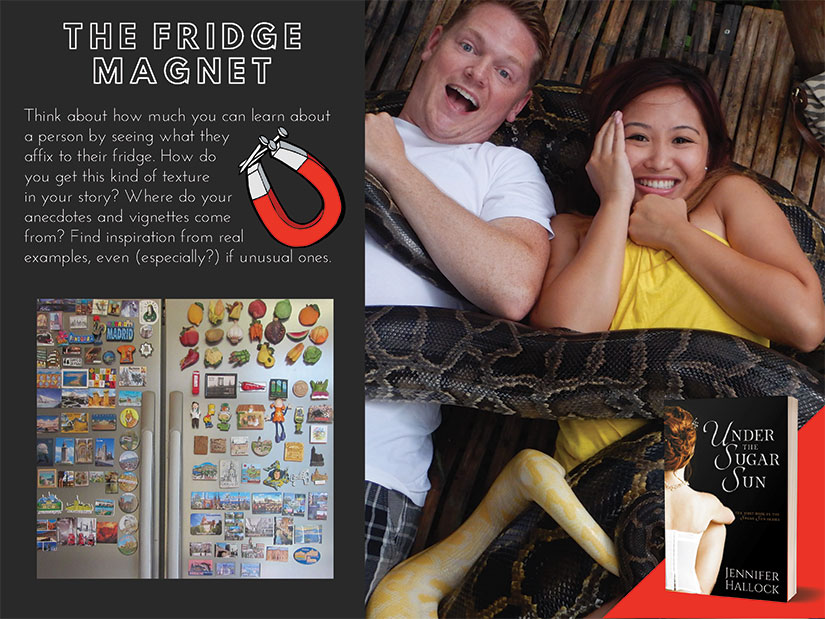 Whenever I approach a primary source, I think: how can this event advance my story or my character development? And you need to be thinking this, too. No matter how much fun it is to research—no matter how many rabbit holes you want to fall down—everything should move your book forward. Stay focused on these five models. I hope they help!

By the way, here is the handout of websites that I cover in the workshop’s “how to” portion: Hallock Micro-History Researching Tips. Happy researching!