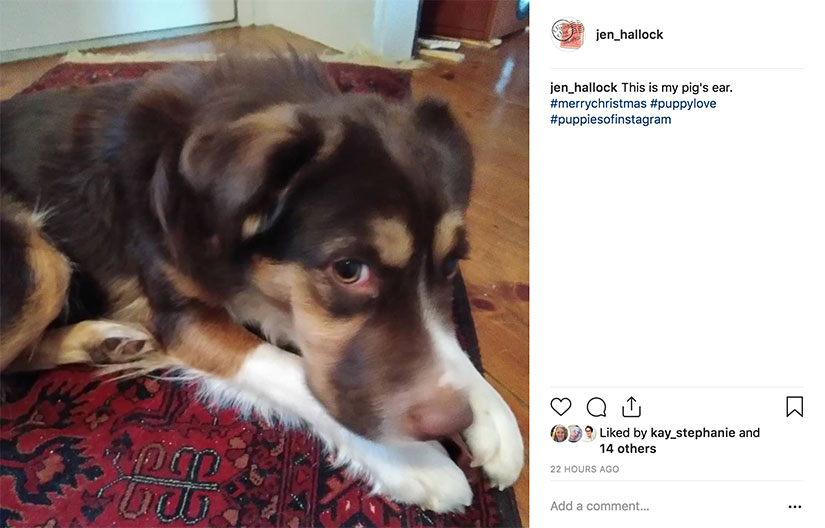 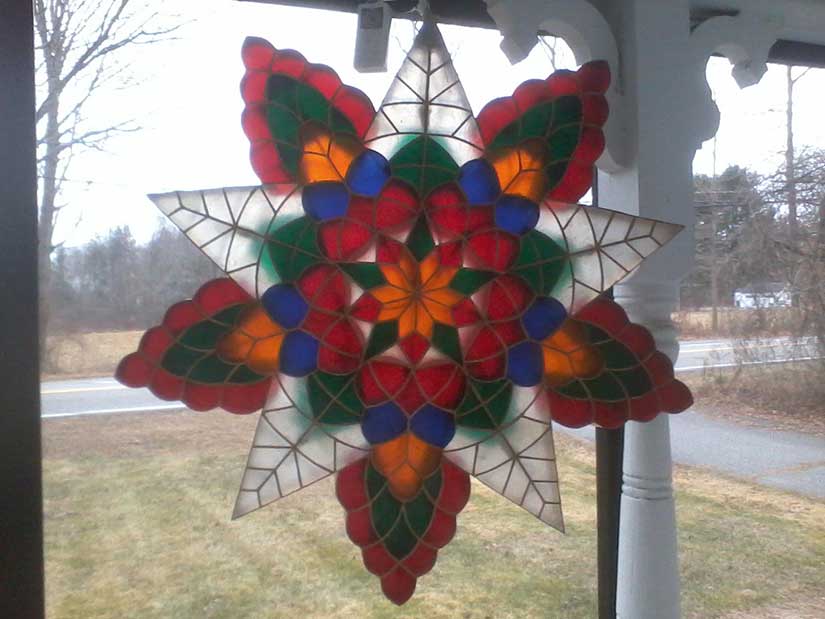 One thing you will have to do without this season is Sugar Moon. It is still coming soon, but rewrites are thorough and ongoing. We are hoping for early 2019, certainly in the first half of the year. Until then, check out the teasers on this site. If you want something Christmas-y, also please check out the epilogue of my latest novella, Tempting Hymn. (Click on the image for a buy link.) Merry, merry. 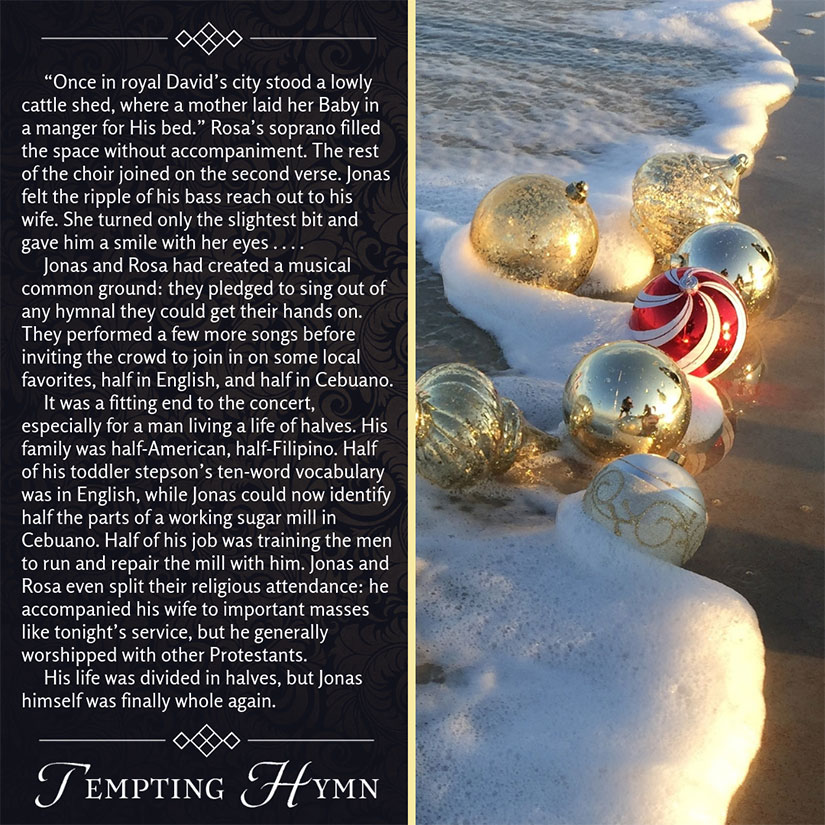 At long last, an alphabetical listing of the Sugar Sun glossary terms! Simply click on the graphic of your choice to open the annotated post in a new window. This list will be updated to include new terms as their posts are written.

I hope the posts are helpful in rounding out the historical context of the Sugar Sun series. They are certainly fun to write! Enjoy.

Christmas in New Hampshire feels surprisingly quiet this year. The holiday season traditionally begins the day after Thanksgiving on “Black Friday”—marking the start of the shopping season, which will bring stores out of the red and into the black with holiday sales. Recently Black Friday has become Black-Thursday-the-hour-after-you-load-the-dirty-plates-in-the-dishwasher. And then this year I noticed advertisements for Christmas-themed books, movies, and products on or before Halloween.

The Philippines celebrates the longest Christmas season in the world, starting on September 1st—when you’ve officially entered the “Ber” months—and lasting through the beginning of January. (Or Easter, according to how long some of my neighbors had their decorations up.) Once September arrives, stores break out the holiday albums, parols are offered for sale alongside highways, and malls get so crowded that you literally cannot drive by them. Seriously, don’t plan on it. And if you do, don’t fight the standstill. Just put on some good tunes, sit back, and relax. You’re going nowhere quick.

But here’s the secret: if you want to drive anywhere in Manila during Christmas season, do so on Christmas Eve. The roads are deserted. The toll booths are unmanned. Skyway is free for everybody!

This “good night,” Noche Buena, is the real holiday. The day begins with a midnight (or pre-dawn) mass called the Misa de Gallo, or mass of the rooster. (Because by the time you leave church, the roosters are crowing.) The evening is for family dinners, and by midnight on Christmas Day the faithful head back to mass.

There is one tradition that may have gotten lost in big city life in Manila and elsewhere: pastores, or shepherds. This pageant-carol of the Nativity drama came from Mexico, thanks to sailors on the Spanish galleons. Its details, though, soon varied by region. The villains could be anyone from the devil (in half-man, half-monkey form) to King Herod to snooty homeowners.

Today, in many places, the daigon has become a set piece dancing and singing performance. But in the early 1900s Visayas, the daigon (or daygon, from “starting a fire” or “lighting up”) was more like what I described in Under the Sugar Sun:

Javier guided Georgina to a house with a pronounced balcony, the perfect place to start the daigon. Mary, Joseph, and a chorus of shepherds and angels were already assembled. Mary was dressed in a blue and white gown, her “pregnant” belly stuffed full of pillows. The band fell silent as the holy couple sang a plea for shelter to the owners of the house. One did not have to know Visayan to understand the girl’s predicament.

The owners of the house responded in turn, and Javier translated in a whisper. “They are saying that the house is already bursting with people.”

Then Mary sang again. “She is promising them heavenly rewards,” he explained. “I think a literal translation is that ‘their names will be written in the book of the chosen few.’”

“It is beautiful,” the maestra whispered. “What did the people in the house just say?”

“They have turned her down. They said their house is not for the poor.”

He found Georgina’s innocence endearing. No doubt she knew the story of the Nativity as well as he did—probably better since she actually went to all the novenas—but her rapt expression made it seem like she was hearing the story for the first time.

They trailed the crowd to the next house, where Joseph begged for a place for his wife, “even in the kitchen,” but was told that the mansion was “only for nobles.” When Mary insisted, the doña threatened to let loose her dogs on them.

Georgina looked around, noticing that they were almost at the school building. “They will not sing to us, will they? More importantly, I do not have to sing back?” She looked truly alarmed.

“Do not worry. They will finish before that, at the ‘stable’—by which I mean the town church, San Nicolás. The crowd and the band will amble on, though, begging for refreshments, so we should prepare.”

Georgina’s eyes lit up. “Your aguinaldos!”

He laughed and squeezed her hand on his arm. “Exactly—including your favorite: chocolate.”

There is a fair amount of seduction over food in that book, even at fiesta. Maybe especially at fiesta!

For a young woman, landing the role of Mary was like being crowned the homecoming queen, though she had better be able to sing, too. Fortunately, my character Rosa Ramos was both pretty and talented:

Singing had pulled Rosa through her childhood. Instead of being just the daughter of a disciplined maid and an undisciplined field hand, her voice had made her the best known fifteen-year-old in Bais. Out of all the girls on all the haciendas, she had been cast as the Virgin Mary in the local Christmas pageant. It said something about her life back then that she could not have imagined anything so grand anywhere in the world. She could have been crowned queen of Spain and still not been as happy as she had been that night.

That was a little holiday gift for you—a taste of Tempting Hymn. Here is another gift: the lighting of the huge Christmas tree at Bais.

An hour later they safely stumbled into a cluster of chromatic light. Georgie wondered if she had fallen under some kind of enchantment….Surrounding the church were hundreds of colorful star-shaped lanterns hanging off white-blossomed frangipani trees. Georgie stood frozen in place, overwhelmed by the feeling that she had entered a secret village of wood sprites.

Want to know a secret? This passage is wrong. Sort of. Maybe.

One thing is right. Those “colorful star-shaped lanterns” are the ubiquitous symbol of Christmas in the Philippines: parols. They are everywhere: on houses, in malls, along highways, and—their original purpose—lighting the path to church. The original star design was reminiscent of the Nativity story:

After they had heard the king, they went on their way, and the star they had seen in the east went ahead of them until it stopped over the place where the child was. When they saw the star, they were overjoyed. (Matthew 2:9-10)

I am still overjoyed when I see a parol. In fact, so much so that I brought one back with me, and it may be the only one of its kind in rural New Hampshire. And, okay, that’s fine—we live in a globalized world these days—but would Hacienda Altarejos really have had a parol or two in 1902? Eh, close enough. The parol—from the Spanish farol for lantern—did originate in Spanish times, so that’s good for my timing. It even seems that the Mexican piñata got jumbled in the origin story somewhere, accounting for the bright colors of crepe paper or papel de Japon (Japanese rice paper). But I think they looked a lot different, more like the regular lanterns they were named after.

It was not until 1908—when a salt vendor in Pampanga named Francisco Estanislao slapped together some bamboo strips in festive shapes—that the tradition we know today was born. And, if Estanislao did not invent this “real” parol until 1908, and he was all the way up in Luzon, wouldn’t it have taken a few years for the tradition to spread to the island of Negros, where my story takes place? Okay, so I was a little off. But no one has called my bluff—yet. I think this is because to anyone in the islands, the Christmas season requires parols. I would have gotten flack if I had forgotten them!

Parols today do light the way to mass…and the way to Starbuck’s, too. Whatever gods ye worship, people! Back in the Edwardian era, the main light sources were candles or coconut oil lamps. These days there are at least three hundred tiny light bulbs in just a small parol. This is why mine had to be refitted for 110v before we shipped it back. (Thank you to Edith Rocha Tan for help on that!) Now, those three hundred lights give unsuspecting New England drivers fits as they drive by at night. Sweet.

Fortunately, the art—and it is an art—of parol-making is still being passed down the Estanislao-David-Quiwa family:

When we were kids, my brothers and I would play with our toy trucks and attach our own parol drawings on cardboard, simulating the position the way the real arrangements of actual giant lantern festival entries were supposed to be during competitions. We simulated a mini-competition in our home and let our tatang [father] judge who among the siblings had the best design.

The giant lantern competition Arvin Quiwa was emulating is Ligligan Parul in San Fernando, Pampanga, which takes place the week before Christmas. And there are similar competitions and displays all around the greater Pinoy diaspora. I’m telling you: it’s not Pasko without a parol, no matter where you are. Maligayang Pasko! (Or Malipayong Pasko! in Cebuano.)